Hello all! I am back to discuss Hurricane Florence and its possible impacts on the Eastern Seaboard.

Initially a tropical wave off of the Cape Verde coast of Africa, Florence formed as Tropical Depression #6 on August 31st. After entering favorable conditions in the Atlantic, she rapidly strengthened into a major category 4 storm (reaching sustained winds of 130 mph) and continued to move northwest.  As she moved north, Florence was slowly ripped apart by vertical wind shear, weakening into a tropical storm. Over the past 24 hours, Florence has begun to reorganize and has regained hurricane strength. She will continue to intensify over the next 48 hours, fueled by a combination of warm ocean waters and low vertical wind shear.

Below is a current satellite loop of Florence. Convection remains strong on her northeast side as she moves NW:

Ocean water temperatures stay above average in the Northwestern Atlantic. This will allow the storm to strengthen into at least category 3 strength:

While most forecasters and models agree over Florence’s strength over the coming days, there is disagreement on where she will end up. A significant factor in determining the track of Florence is a broad ridge of high pressure to the north of the storm (shown as orange/red in the maps below). If the ridge remains strong, it will steer Florence further south and prevent her from re-curving out to sea. The European model projects this below:

This scenario would be catastrophic for the Carolinas and mid-Atlantic as the storm makes landfall Thursday night. From a meteorological standpoint, the European model checks out. As Florence digs into the ridge, it will begin to curve northward and eventually northeastward as the ridge shifts to the west. Other hurricane-focused models are showing this solution as well: 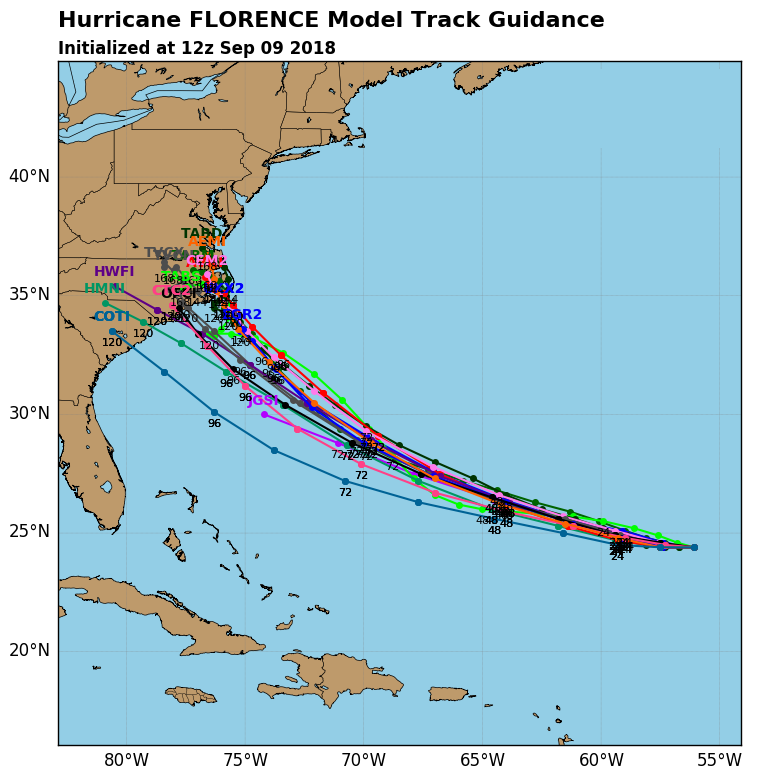 The UK model is having the same issues collapsing the ridge but keeping Florence largely stationary:

While I am leaning toward the European solution over the GFS and UK, there are a couple factors that need to be ironed out. First and foremost, the models will have to reach consensus on Florence’s interaction with the ridge. Without agreement, it will be challenging to predict her track. Second, we need to determine what the impacts will be on the coast and prepare accordingly. The European solution brings hurricane force winds into NC/SC and significant rains into the Southeast: 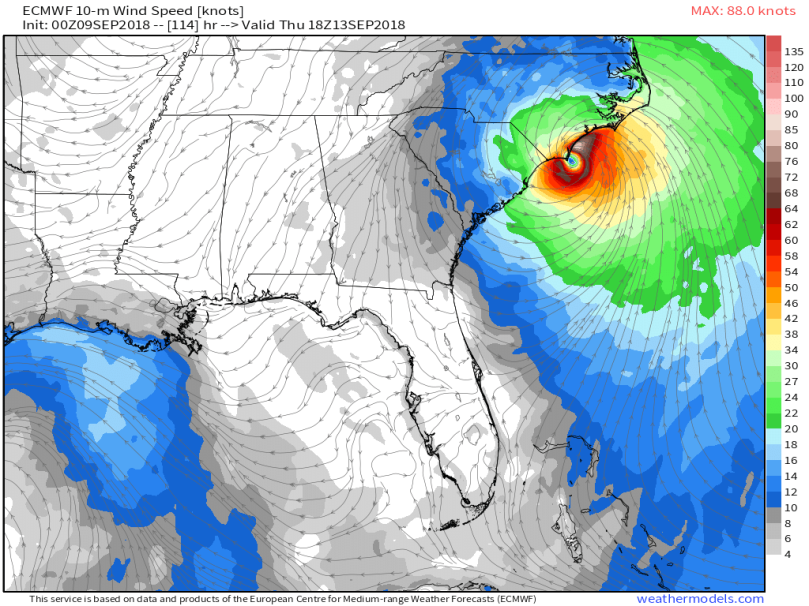 While the Delaware Valley doesn’t appear to be in the direct path of the storm, please keep a watchful eye on this system. Regardless of Florence’s potential track, the NJ/DE/MD coastline should begin to prepare for rough surf and high winds late in the week.

I will continue to post updates as we gain greater clarity on the situation. Thanks and stay dry!