Winter is starting early on the eastern seaboard with the first real chance of snow and sleet since March. While most teleconnections do not indicate a major snow event, the current weather pattern promotes storm development along the active jet stream.

As it stands, we are drying out from a fairly substantial nor’easter last night. Tomorrow will be a sunny, chilly day, as an area of high pressure dominates to our northwest. Simultanously, a disturbance will begin to form out of the Gulf of Mexico and strengthen as it slowly moves northeast:

As the disturbance moves offshore, it will continue to intensify. The storm will gather a massive amount of moisture from the warmer than average Atlantic as it moves along the coast and partially phases with an upper level disturbance over the Ohio Valley:

The area of high pressure will be pushed eastward, setting up a cold flow from the north. This arctic air will fuel the west side of the storm, bringing a widespread area of wintry precipitation to the Northeast from Thursday into Friday.

While we’re only 40 hours from the event, there is still uncertainty regarding  precipitation type along the I-95 corridor. Surface temperatures will be cold enough to support frozen precipitation, but the upper atmosphere will be heavily influenced by the warmer Atlantic ocean. For our area, this means an intital period of snow, followed by sleet (as the upper atmosphere warms). For areas south and east of I95, the sleet will eventually turn primarily to rain. From I-95 northward, the precipitation type will continue to be a mixed bag.

Below shows the descrepency between a warmer upper atmosphere (540 mb rain/snow line over central NY) and colder surface temperatures. This setup is the perfect recipe for a sleet storm: 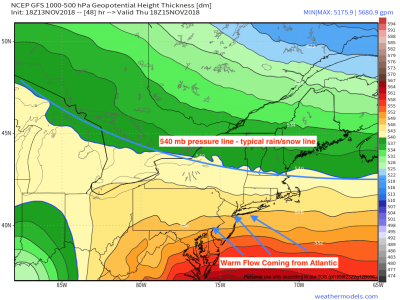 The simulated radar from the short range NAM model shows the mass of sleet overtaking the region on Thursday evening (marked by the orange):

By Thursday night, the sleet will be mixing with rain in most areas and temporarily end overnight. The backend of the storm will bring a second round of rain/snow to the area early Friday morning. Depending on the amount of cold air aloft, parts of the area could receive an additional coating-1 inch of snow by sunrise. The map below shows the projected backend hit:

11 AM – 1 PM: Snow starts from south to north. Minor accumulation on grassy surfaces.

6 PM – 12 AM Friday: Sleet changes to rain along I-95. Precipitation slows down south to north

12 AM Friday – 8 AM: Potential for backend precipitation, heavy snow possible in parts of the area.

November snowstorms are not known for their accumulations and for good reason. The ground this time of year is relatively warm, which impedes snow totals. However, I believe the front end snow has the potential to deliver a quick 1-3 inches in the Philly suburbs on grassy surfaces. Most of it will melt by Friday, as the high temperature reaches the upper 40s. Conditions will be pretty nasty on Thursday, but roads will stay wet. As in any major storm, drive slow and take care when the visibility is low.

With a weak El Niño arriving, history indicates it will be an exciting winter for the eastern seaboard (see my past posts from the winter of 2013-2014 for a preview 🙂 ). I will be providing full coverage of incoming winter storms and patterns as we officially head into winter. Prepare for some snowy times ahead!